How about a little treat? Post a comment over the weekend on this post or send me an email and on *Monday, I'll pick someone randomly to receive some of these versatile paper butterflies to do with as you wish.

*Time's up- Thank you to all who participated! Please read the comments for answers to your questions.
Porkshop
Posted by Karyn at 11:53 PM 7 comments: 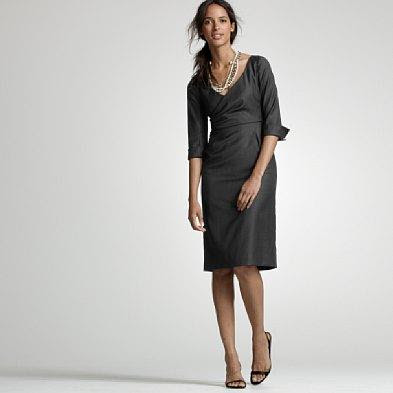 Project #1 for my sewing class has been turned in for grading and will be ready for your critique very soon. Today I'll start Project #2. I've chosen this pattern and will be completing the view on the bottom right. I've had my eye on this pattern for quite some time but I'm the kind of girl who really needs a deadline to get things done which is why this class is so good for me. I've chosen a grey sateen fabric which is simply a woven cotton that looks shiny because of it's weave type. If all goes well, I'll be wearing this on Christmas Eve and it will look as good as the JCrew number pictured here. Keep your fingers crossed.
Posted by Karyn at 6:00 AM 1 comment:

Old tools collected and sold to you & me to give them new life. What a great concept. I'd love them even more if they came with a note about the gardener with whom they previously did work.
Posted by Karyn at 8:23 PM No comments:

Orange is probably my favorite accent color but I've never thought to use it on the walls. I do like this application. With the black border and natural art, it's so very interesting. If I had just the right space for it, I might consider being this bold.
Martha
Posted by Karyn at 10:10 AM 1 comment:

I am determined to build up the contents of my cupboards with pieces like these just for parties. Such variety. Such fun. Really, don't you just think that a big party using all of these pieces would have to be a good time?! To me, there doesn't seem to be any way around it. Oh, the conversation! I love a party.
City Sage, This is Not My Work

It's Not Too Late 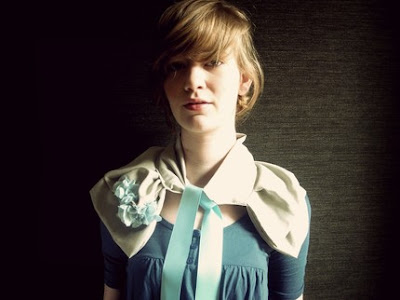 If you haven't yet decided how you'd like to dress for Halloween, I suggest this beautiful piece. It's description reads,

"One Halloween in the 1920s, when Vanderbilt Jr. threw a party {at the Biltmore house in North Carolina}, it went a little awry and many of his drunk and crazy guests went to the basement and did a little painting job on the walls. The mural of a hodgepodge of tipsy stick figures is still there in the empty room called the "Halloween Room."

In the 1920s, when parties were big, people didn't necessarily dress up as a character for Halloween, but they BECAME the character. "

I like it. I'd wear it longer after Halloween. Find it at Vagabond.
Posted by Karyn at 8:40 AM No comments:

Butter yellow twill speaks to me. I've often dreamed about using it on the couch in my bedroom but in the end, I've fallen in love with another print. So, I've purchased two shower curtains and will be using their fabric to give the couch in our master bedroom a new look this weekend. I promise to show you how it turns out next week. Good or bad. What are your plans?
Anthropologie
Posted by Karyn at 7:57 AM 1 comment: 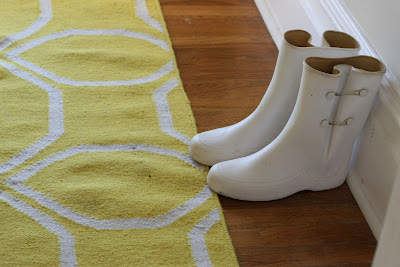 Vintage rain boots to wear when the garden gets wet and muddy but still needs attention.
Design Mom
Posted by Karyn at 11:05 PM 4 comments: 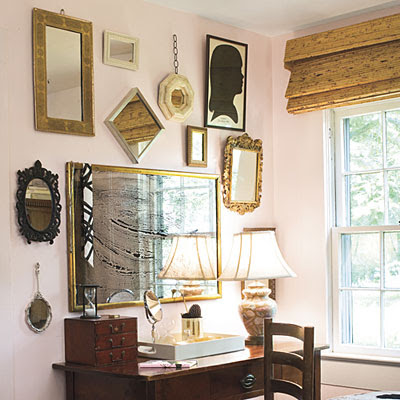 It's so wise to create this gallery on a small wall. I for one might never know when to stop otherwise. It would just grow and grow and grow.
Posted by Karyn at 12:52 AM No comments:

This work space seems suitable to just about any kind of work. Those drawers might be full of patterns or drawings, fabric pieces or magazine clippings. Wouldn't it be fantastic if they held all of those things and more and they were all at our disposal. We could sit together as if in Kindergarten and build beautiful collages while we got to know each other over coffee. Each person learning from the other. I long for this, an art society of sorts.
Cafe Cartolina
Posted by Karyn at 8:10 AM 3 comments:

A yellow scarf is a must have for me this fall/winter season. I read a post at Draw, Draw, Draw one grey day last year and knew immediately after that a yellow scarf is truly a necessity.
Uniform via Frolic
Posted by Karyn at 11:42 PM No comments:

I'm hoping to pull out the summer garden *today in order to replace it with a winter one. We've only ever had a summer garden so this will all be new to us. I'm envisioning our crops all coming up at once and wondering what we will do when we have broccoli, cabbage and cauliflower all ready at once. Our locally famous nurseryman told me "stagger the crops; plant radishes every three weeks." We don't currently eat radishes but that's not going to stop me from planting them. Look at how beautiful they are.

Just last night we found a recipe for eggplant that we kinda like. Up until then, it's just been looking pretty out there in the garden. Occasionally it's shared with one of my sisters. Now we know we like it if even just a little and we'll be more apt to try something new.

*It's raining now so we'll see.
Martha Stewart
Posted by Karyn at 9:19 AM 1 comment: 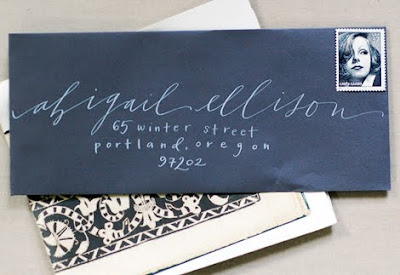 Now that I've seen this beautiful image, I vow to never use a boring white envelope again. Furthermore, I will be practicing my penmanship and sending more letters as well.
Neither Snow via Oh Joy!
Posted by Karyn at 10:47 PM 2 comments: 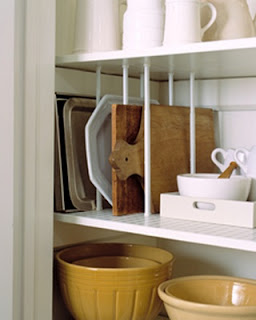 An organized pantry is something I dream about. It's not so much about the organization involved as it is the idea of having one. The organization part comes with it naturally.

My grandparents had a fantastic pantry in their kitchen. It had two doors and along galley space that stretched between them. All of the walls had were just shelves and shelves from the ceiling to the floor. Anything you might need for everything from large dinner parties to family brunches could be found there.
Posted by Karyn at 8:27 AM No comments: 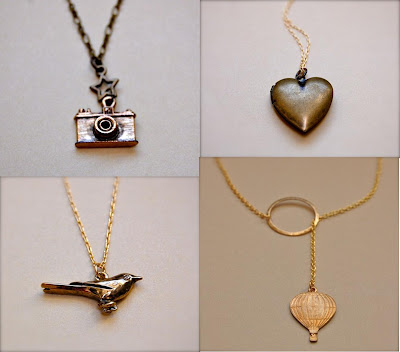 The Bumbling Bird has plenty! These are perfect little gifts to have on hand for girlfriend birthdays or congratulatory gifts to mark a special day. I can think of quite a few girls who'd be very happy to open a little box to find one of these treasures inside.
Posted by Karyn at 6:47 PM No comments:

An Apple A Day

What does fall mean to me? Baked apples, apple pie, apple cider, & apple sauce. By this time next year, I expect our apple tree to look like this one, I can hardy wait. What are you looking forward to?
Martha Stewart Living via The City Sage
Posted by Karyn at 11:46 PM 2 comments: 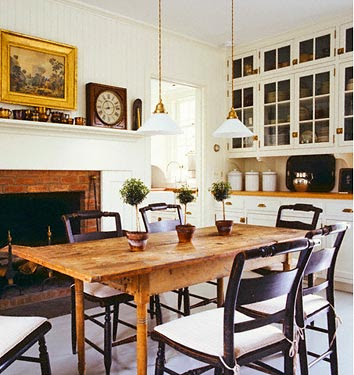 This dining room makes me think of soups and warm bread. I'd love to have a fireplace in the kitchen/dining room. If it was feasible in my own home, I would switch the living and dining spaces for just this reason. I can't help but think that the fireplace would get more use there. It would somehow go from a sort of luxury or extra like it is now to be a more natural part of our fall and winter days. It would begin with morning coffee, welcome the kids when they come home from school to sit by a warm fire to do their homework, and cozy up the kitchen for dinner and evening activities.
Domino 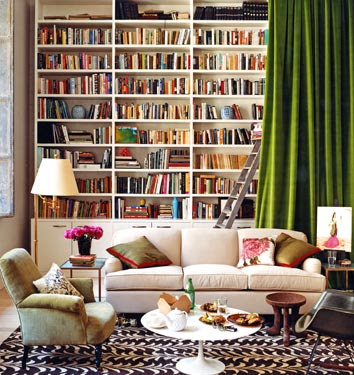 A perfect day to curl up and read a book! I've decided to read Breakfast at Tiffany's. It's one of those movies that we watch and watch so I really should read the book, I'm sure to like it. 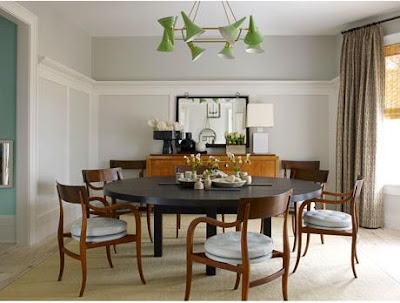 I'm completely in love with these french lamps. I'm dying to know more about them and thinking, thinking, thinking about how I can, where I can incorporate them into my design plan. I don't know that they would ever work here. I may have to be satisfied loving them from a distance. {1st Dibbs, House Beautiful}
Posted by Karyn at 11:11 PM No comments:

Things You Should Try

If you haven't before, I recommend you try putting up your own batch of freezer jam. We use strawberries from a local stand. The kids put it on toast & in their sandwiches, we have it with dumplings, ice cream and even just by the spoonful. {Image-Spain Daily}
Posted by Karyn at 1:33 PM 1 comment:

I saw the most beautiful headboard today at a garage sale for $25. It was tall, old, wooden, painted white. Perfect really. I don't have any where to use it. I thought and thought about who I might know that does and didn't come up with anyone. so, I walked away. Of course, I haven't stopped thinking about it yet so tomorrow I'll have to drive by just to be sure that it found a good home. If not, hmm...we'll see.
{Cottage Living}
Posted by Karyn at 10:51 PM No comments: 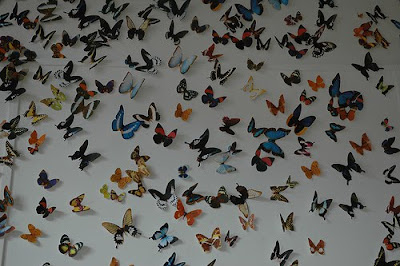 Because I really would like to have taken all the beauty I saw today home with me.
{1st Dibbs, Design Mom, Etsy}
Posted by Karyn at 11:08 PM No comments: Husband has been watching the National Parks series on PBS which has made me want to find an old Airstream (with and adorable little kitchen like the one pictured above) and get on the road with our brood. We'll settle for a short trip to the mountains today. Look out Yosemite, here we come!
{Apartment Therapy}
Posted by Karyn at 12:08 AM No comments: 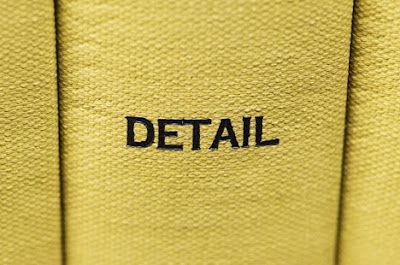 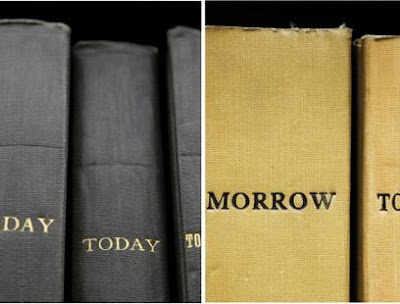 Came across the works of Mickey Smith and fell in love. Since I'm more apt to decorate with books than with pictures, I will be on the look out for books like the ones she's used in her photos to liven things up around here.
{found via Style Court}
Posted by Karyn at 9:35 AM No comments:

It Seems to Me

From a window like this, you would most certainly look out to see a garden like this, surrounding a home like this.
{Cafe Cartolina, Martha Stewart, unknown}
Posted by Karyn at 7:00 AM 3 comments: 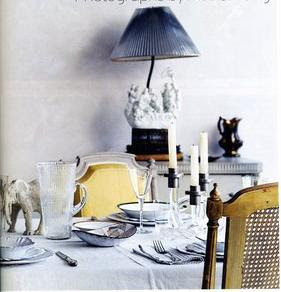 Beautifully styled pictures of food, restaurants, travel destinations and more with such depth in color. Intelligent writing on topics of interest to anyone who eats. A Cookbook Club! Delicious recipes. I aspire to better myself in one way or another with each new issue. I will miss getting it in my mailbox. Goodbye, Gourmet.
{Source, Pigtown Design}
Posted by Karyn at 1:43 PM No comments: 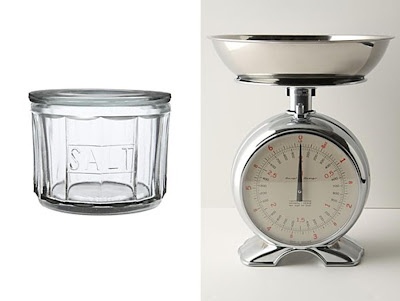 The addition of these two items to the space mentioned previously would only add to it's perfection. I'm sure you'll agree.
{Anthropology}
Posted by Karyn at 10:01 PM 2 comments: 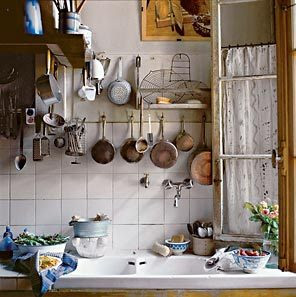 You know how much I love a messy, lived in space and I really do make an absolute mess in the kitchen when I cook so, of course, this kitchen space is one I think about often. I find it to be quite beautiful. It must belong to a kindred spirit of mine.
Posted by Karyn at 9:56 PM 2 comments: 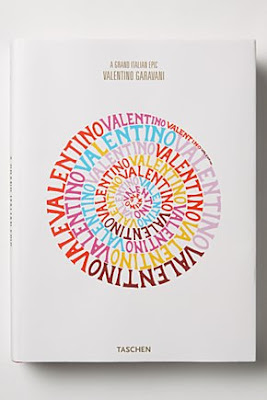 My weekend from this morning all the way through Sunday evening will almost exclusively consist of laying around. I will taking a break from that activity only for a special viewing of Valentino, The Last Emperor. I think it will be worth the effort. {Book, Anthropology}
Posted by Karyn at 10:22 AM 2 comments: 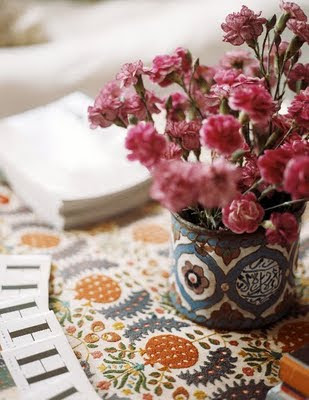 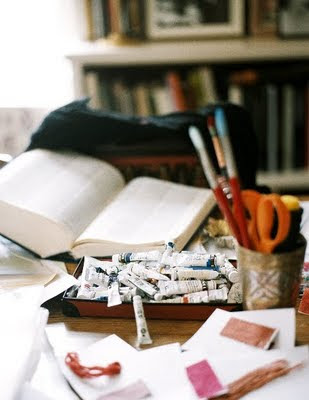 Lonny Magazine debuts today. I can't wait to sit down this afternoon and take a long look.
{Lonny Magazine via M.A. Bell}
Posted by Karyn at 6:00 AM No comments:

I'm Karyn, a student of fashion and lover
of all things beautiful. The intention of
this little blog is to serve as an exchange
of thoughts about beautiful images and
the creativity they inspire. So, I'd love to hear from you!